The significance of strewnfields of large granite erratics throughout the Inman Valley was discussed in an earlier note (Milnes, 2019).  They essentially pinpoint outcrop or subcrop of in-situ glacigene diamictite from which they have been exhumed, or within which they still remain partly encased.  The diamictite is generally plastered over smoothed and striated Cambrian Kanmantoo Group bedrock.

Good examples of these boulder lags occur on the beach at Rosetta Bay and were recognized early on as glacial erratics eroded from glacial till (for example, Howchin (1910; Fig. 1).  Milnes (2019) located and photographed remnants of the source diamictite underlying these boulder lags (Figs 2, 3).  However, recent drone photographs taken in the area by Isaac Forman (Serio.com.au) have shown that significant boulder lags occur on the landward side of Wright Island (Fig. 4) and, based on the forms visible beneath the sea surface, may also exist on the seabed in the Bay between the shore and the Island.

One implication of this observation is that the bedrock (Petrel Cove Formation, Cambrian Kanmantoo Group) is at a relatively shallow depth and that the glacial till from which the boulders were eroded (or within which they may be partly embedded) remains close to the sea floor.  Another is that the early held view that the granite landforms (particularly Wright Island and Rosetta Head) were ice-moulded during the Permian glaciation about 300 million years ago is probably correct.  And, finally, it may still be possible to find direct evidence of glacial pavements on parts of these granite landforms, like that discovered fortuitously many years ago at Port Elliot (Milnes & Bourman, 1972).

Lag of erratics overlying and being exhumed from diamictite adjacent to boat ramp.

Detail of granite and other boulders (probable erratics forming a lag weathered out of Permian glacigenes). 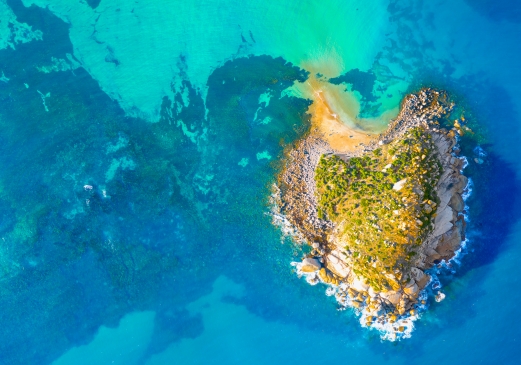 Howchin, W., 1910, The glacial (Permo-Carboniferous) moraines of Rosetta Head and King’s Point.  Transactions and Proceedings and Report of the Royal Society of South Australia 34, pages1-12; plates 1-17.

Milnes, A.R., 2019, What’s the significance of the large granite erratics scattered through the Inman Valley in South Australia?  https://earthnotesblog.wordpress.com/2019/07/25/