Subsamples were taken of a collection of fossil shells recovered from a depth of around 3 m in trenches excavated in the Oyster Point Caravan Park by local contractors to improve drainage. Several of the fossils (Fig. 1) had been identified by SA Museum personnel and assigned to species including bivalves Katelysia scalarina and Sanguinolaria (Psammotellina) biradiata, and the large gastropod Turbo (Dinassovica) jourdani. All species are still living around the Australian coast, but these shells are clearly ancient and belong to a time when the coastal cliffs at Stansbury stood inland of the caravan park and the township and are now represented by the base of the hill that runs from the cemetery, northwards behind the town centre, and joins the current shore cliffs near the primary school oval. The seas, of which the fossil shells are a legacy, covered all of the lowland eastwards of these ancient cliffs. The cliffs themselves are in fact cut into much older marine deposits, as can be seen behind the jetty and elsewhere along the coast. These relate to the Tertiary period between 3 to 23 million years ago when much of Yorke Peninsula was inundated by sea.

Shell subsamples of two of the species (Katelysia scalarina and Sanguinolaria (Psammotellina) biradiata) were dated in the laboratories of the School of Earth & Environmental Sciences at the University of Wollongong by Professor Colin Murray-Wallace and his colleagues. They used a technique called Amino Acid Racemisation (AAR) and found that the shells are about 125,000 years old. Professor Murray-Wallace can be confident of this dating because he and his colleagues have much experience in determining the ages of ancient Quaternary coastlines of southern Australia and their fossils (see Further reading).

Sea levels 125,000 years ago (Fig. 2) were up to 2m above current sea level, as this time was part of an interglacial period (formally called the ‘Last Interglacial’) when ice in Antarctica and elsewhere had melted somewhat due to warmer global temperatures. This accounts for the encroachment of the seas into the embayment now occupied by much of Stansbury township, and the formation of the old cliff-line. The marine and coastal deposits generated at this time, and which occur widely around South Australian coasts, are referred to the Glanville Formation.

It might be of interest to note that several earth scientists, including Professor Murray-Wallace, have written a book on the coastal landscapes of South Australia. This is currently in press and should be available soon. It includes a chapter on the entire coast of Yorke Peninsula, including Stansbury. As well, a student from the School of Earth & Environmental Sciences at the University of Wollongong (Tsun-You Pan, visiting from Taiwan), and supervised by Professors Murray-Wallace and Bourman, has recently commenced a PhD research project on the Last Interglacial coasts and their deposits on southern Yorke Peninsula and may be able to report in future on his findings on these materials, including the Stansbury Caravan Park fossils. 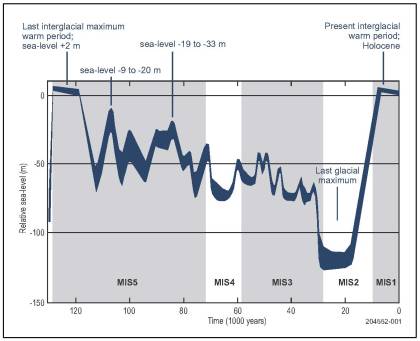 Fig. 2. Sea level curve for the past 130 000 years. Adapted from Lambeck and Chappell (2001). The thickness of the line of the curve is an expression of the degree of uncertainty of the calculated sea-levels. During the Last Glacial Maximum sea level was about 120 m lower than at present. The Last Interglacial warm period occurred about 130 000 to 120 000 years ago, when sea level was at least 2 m higher than at present. The present interglacial warm period (Stage 1) has existed for little more than the past 10 000 years. Source: Cann, J. (2014). Robe Geological trail. (Geological Society of Australia: South Australian Division).