Douglas Mawson was born on May 5, 1882 at Shipley in Yorkshire and migrated in 1884 to Australia with his parents Robert and Margaret and older brother William.  From 1895 to 1898, William and Douglas attended Fort Street Model Public School in Sydney, one of the best public secondary schools in Australia.  From 1899 to 1901, Douglas Mawson studied Mining Engineering at the University of Sydney, graduating on April 19, 1902.  Mawson’s best results were in geology under the influence of TW Edgeworth David, the charismatic Professor of Geology at the time. This was the start of a lifelong friendship and professional association, which ended only on David’s death on August 28, 1934 (Corbett 1998, 2000).

In 1902 Mawson commenced a Bachelor of Science degree, majoring in geology.  This was interrupted by him spending several months (April to September 1903) studying the geology of the New Hebrides (modern Vanuatu) at the behest of Edgeworth David.  Mawson graduated with a Bachelor of Science in early 1905 and commenced an appointment as Lecturer in Mineralogy and Petrology at the University of Adelaide on March 1, 1905.  The only other geologist at Adelaide University at the time was 60 year old Walter Howchin.

After arrival in Adelaide, Mawson was very active and in particular studied the geology of the Broken Hill area and the neighbouring Olary area in South Australia.  Here Mawson found Precambrian rocks that he considered to have been deposited by glacial action.  He wished to see modern glacial activity and in late 1907 contacted Edgeworth David, and through him, Ernest Shackleton, the leader of the 1907-1909 British Antarctic Expedition (BAE).  As a result, he was appointed as physicist to the expedition.  The BAE was based on Ross Island.  Highlights of this expedition for Mawson were participation in the first ascent of Antarctica’s only active volcano, the 3794m high Mt Erebus, and membership of the first party (with Edgeworth David and Alistair Mackay) to reach the vicinity of the South Magnetic Pole.  David and Mawson returned to Australia as heroes.

Later in 1909, Mawson found time to continue his Broken Hill studies and completed his doctorate before the end of the year.  While working in Broken Hill, Mawson met Paquita Delprat, a daughter of Guillaume Delprat, the General Manager of BHP, whom he later married.  Mawson visited London in late 1909 and unsuccessfully tried to persuade Scott to land him at Cape Adare, in order to study the geology of the area.  He then organised the Australasian Antarctic Expedition (AAE), the story of which has been well documented by Mawson (1964), Ayres (1999), Hall (2000), Fitzsimons (2011) and particularly by Riffenburgh (2011) who gives the most comprehensive account.  The AAE was most notable for Mawson surviving and struggling back to the base at Commonwealth Bay after the deaths of Belgrave Ninnis and Xavier Mertz, his sledging companions on the Far Eastern Party.  The boat had already left and Mawson was obliged to stay in Antarctica for another twelve months with six members of his party, led by Cecil Madigan, who had stayed behind.  As part of the AAE, bases were also established on Macquarie Island and the Shackleton Ice Shelf.  The AAE saw the first use of radio communications with Antarctica.

Mawson was knighted in 1914. He was in the UK from 1916 as part of the war effort, returning to Adelaide in April 1919 where he was appointed Professor of Geology and Mineralogy at the University of Adelaide in 1921, a position he held until his retirement in 1952.  For the next few years Mawson was involved in raising funds to pay off the debts of the AAE and in organising the publication of the scientific reports resulting from the expedition.  He was an enthusiastic field geologist and did considerable field work in the Broken Hill/Olary and Flinders Ranges areas, usually accompanied by students.

In the summers of 1929-30 and 1930-31, Mawson led the ship-based British, Australian and New Zealand Antarctic Research Expedition (BANZARE) using the Discovery, the ship used by Scott in his first expedition in 1901-04.  This was a largely marine science, oceanography and biology expedition, but included landing on Heard Island and a visit to Mawson’s old headquarters at Commonwealth Bay.  On the second voyage, Mawson claimed formal possession of King George V Land on behalf of Britain.  This is the basis of the present Australian claim to what is termed the Australian Antarctic Territory, which represents about 40% of Antarctica.

Mawson continued his field work in the Flinders Ranges in the 1930s and 1940s.  He was a driving force in the establishment of ANARE (Australian National Antarctic Research Expeditions) that still runs the Australian Antarctic research activities.  He continued to publish research papers until his death on October 14, 1958.

The University of Adelaide and the adjacent South Australian Museum have displays where Mawson memorabilia can be viewed.

The Tate Museum in the Mawson Laboratories in the University at the corner of Frome Road and Victoria Drive has a display showcasing Mawson’s Antarctic activities on its southern wall.  Some of the rocks collected on the Australasian Antarctic Expedition of 1911-14 are housed in the display cases and there is a substantial further collection in the basement crypt archive (where some sample boxes containing these specimens are as yet unopened).  One of the AAE sledges is on the north wall of the Tate Museum. 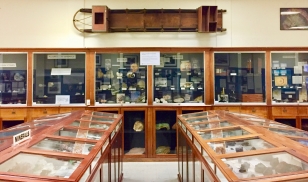 On North Terrace, at the entrance to the University just west of the Bonython Building, there is a bust of Mawson which was unveiled in 1982 on the occasion of the Fourth International Symposium on Antarctic Earth Sciences, held in Adelaide to commemorate the centenary of Mawson’s birth.  At the foot of the bust are two large boulders: one is charnockite from near Mawson Station in Antarctica and the other is pegmatite from Arkaroola in the northern Flinders Ranges.

A recently revamped Australian Polar Exhibit at the South Australian Museum, just to the west along North Terrace, deals with Mawson’s three visits to Antarctica, as well as his work in the Flinders Ranges.  There are numerous artifacts from this work as well as some general information on Antarctica.  There is also reference to the other two major Australian polar explorers from the pre-World War II era, namely Hubert Wilkins and John Rymill, both of whom were born in South Australia.